Skip to content
Home/Posts/Labor News/Major Victory in Our Fight for $15 Movement: Amazon Raises Wages to $15

Major Victory in Our Fight for $15 Movement: Amazon Raises Wages to $15 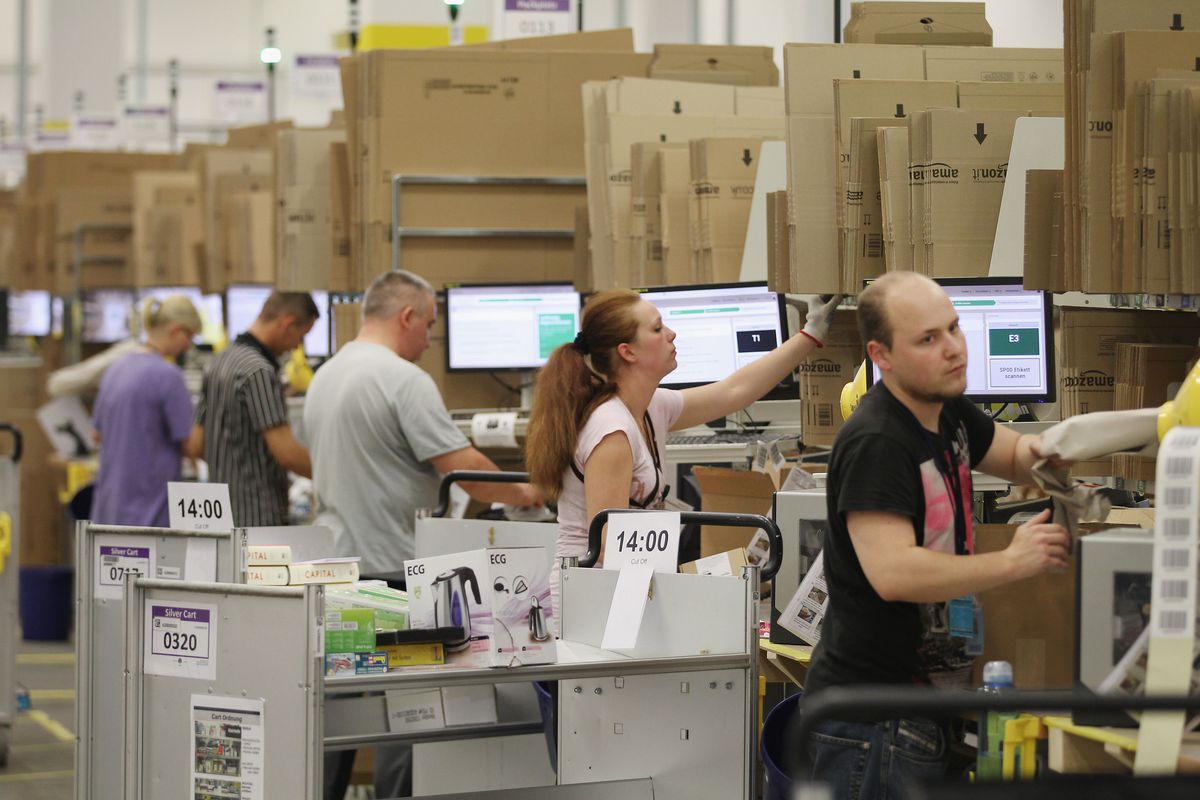 NEW YORK (AP) — Amazon, the business that upended the retailing industry and transformed the way we shop for just about everything, is jumping out ahead of the pack again, announcing a minimum wage of $15 an hour for its U.S. employees that could force other big companies to raise their pay.

The online giant also said it will push Congress to increase the federal minimum wage, now at $7.25.

Given Amazon’s size and clout, the move Tuesday is a major victory for the Fight for $15 movement, which was spearheaded by Service Employees International Union (SEIU) in 2013 and has organized protests of fast-food, gas station and other low-paid workers. Already, several states and cities have raised their minimum wages above the federal one.

Amazon, whose value topped an awesome $1 trillion in September, has been under political and economic pressure to pay its employees more.

“We listened to our critics, thought hard about what we wanted to do, and decided we want to lead,” said Jeff Bezos, Amazon founder and CEO.

But Amazon may also be offering raises out of necessity: With the economy booming and unemployment near rock bottom, employers are having difficulty finding help. Amazon, with about 100 warehouses around the country, will soon need to hire more than 100,000 workers to pack and ship boxes during the holiday season.

Amazon said the move will benefit more than 350,000 workers, including full-time, part-time, temporary and seasonal positions. Employees at Whole Foods, the upscale grocery chain Amazon owns, will get the same raise. Hourly employees who already make $15 per hour will also see a wage increase, the Seattle company said. (Workers in Britain will also get a raise.)

Current pay for warehouse workers at Amazon is at least $12.25 an hour in Omaha, Nebraska, $13 in Baltimore and $16.50 in New York, according to recent job postings.

The announcement was enough to soothe one of Amazon’s fiercest critics: Sen. Bernie Sanders. The senator, who frequently uses Twitter to point out the disparity between Amazon’s hourly wages and Bezos’ vast fortune, congratulated Bezos for “doing exactly the right thing” and urged other companies to follow Amazon’s example.

Sanders described Amazon’s move as “a shot heard around the world.”

It is no secret that I have been a harsh critic of the wage and employment practices of Amazon and its owner Jeff Bezos. It has been my view that the middle class and working families of this country should not have to subsidize Mr. Bezos, the wealthiest person on Earth because many of his Amazon employees earned wages that were so low that they were forced to go on government programs like food stamps, Medicaid and subsidized housing. Today I want to give credit where credit is due. And I want to congratulate Mr. Bezos for doing exactly the right thing. Today he has raised the minimum wage at Amazon and Whole Foods effective next month. This applies not only to full-time workers, but part-time workers and temporary workers as well. Further, Mr. Bezos has indicated his support to raise the federal minimum wage. As the author of the $15 per hour minimum wage bill in the Senate, I look forward to working with him in this area. Let me thank the many hundreds of Amazon workers who contacted my office and the Fight for $15 movement which has been leading this effort for years. What Mr. Bezos has done today is not only enormously important for Amazon’s hundreds of thousands of employees, it could well be a shot heard around the world. Mr. Bezos and Amazon are helping to lead the way, but there is no reason why other profitable corporations in the fast food industry, the airlines and retail should not be following suit. Bottom line is that in the richest country in the history of the world, no full time employee should be living in poverty. I urge corporate leaders around the country to follow Mr. Bezos’ lead, and I congratulate him for what he has done.

It will have repercussions beyond retailers and will put pressure on any company that operates a distribution center, said Gerald Storch of the retail consulting firm Storch Advisors.

“This will lead to a general increase in minimal wages in all industries,” he said.

At the same time, Storch said, the wage increase will widen the gap between the healthy retailers, such as Amazon, Walmart and Target, and the struggling ones, which won’t be able to afford to compete on salary.

“The weaker retailers have been cutting costs and squeezing every penny,” Storch said. “They are in a very tough place.”

Amazon, founded more than two decades ago, has expanded far beyond its bookseller beginnings. Despite its dominance, it shares a major problem with employers big and small: a tight labor market. Unemployment in the U.S. is 3.9 percent, near an 18-year low. Higher pay for workers is one way of dealing with that.

Walmart raised its starting pay to $11 an hour earlier this year and said it has seen lower turnover among its employees. Target, which announced plans last year to raise hourly wages in steps to $15 by 2020 and now pays $12 an hour, said the number of job applicants rose 60 percent in the days after it increased its minimum by $2 to $11 per hour last year.

Amazon said it doesn’t expect to raise prices for its products to pay for the wage increases.

The push for a higher federal minimum wage will be overseen by Amazon’s Jay Carney, White House press secretary during the Obama administration. Amazon won’t ask Congress to raise the minimum to a specific number.

This story was originally published here.