Special Education Assistants, Classroom Aides, Custodians, Bus Aides and 7000 other SEIU Local 73 classified employees at Chicago Public Schools (CPS) are on strike today with teachers who are members of the Chicago Teachers’ Union (CTU). They are demanding quality schools, including improved staffing for student support services, living wages for school workers who are critical to student learning, and smaller class sizes. We are proud to stand with them. In the weeks leading up to the start of the strike today, SEIU Local 99 Member Jeanette Verbera, a Special Education Assistant at LAUSD, and Organizer Toi Jackson have been on the front lines in Chicago, helping our Local 73 brothers and sisters prepare for a strike and learning more about the power of union solidarity. Toi sent this report from the strike lines: 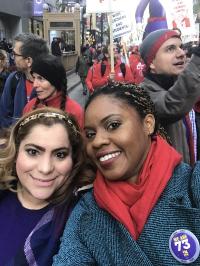 SEIU 99 Member Jeanette Verbera and Organizer Toi Jackson on the strike lines with classified employees and teachers in Chicago.

My experience working with SEIU Local 73 helping the support staff in Chicago Public Schools (CPS) has been enlightening and inspirational. Speaking with the workers out here as they fight for a fair contract has been very informative. I have been assigned to work closely with the CPS employees visiting schools in the northern area of the city with SEIU Local 99 member Jeanette Verbera who happens to be an LAUSD Special Education Assistant. There are more than 7,000 school support staff and more than 94 percent of them voted this past summer to authorize a strike. Teachers voted to authorize a strike on October 17.

I learned there are many issues that classified employees in Chicago share with LAUSD and other school districts in California in regard to classroom sizes, resources, wages, benefits and staffing. For example, it is difficult for a school worker to earn a living in the city with the current wages. There are stories that Bus Aides are homeless and sleeping in their cars because they are so under paid. There are also Bus Aides who only work 4 hours a day. This is similar to Campus aides at LAUSD. Like many school jobs in Los Angeles, classified employees in Chicago are among the lowest paid group of workers and need more hours. There are also the Special Education Classroom Assistants (SECA’s) who are fighting to be recognized for translating for teachers and students and not getting compensated for the amount of education they have on the job. This is similar to Special Education Assistants at LAUSD who are also asked to do some translation in the classrooms and are not getting compensated as well.

But school workers are taking a stand. Over the past few weeks, Local 73 members have taken many historic actions leading up to the strike such as marching to the Mayor’s Office in City Hall with their notice to strike letters and marching through Downtown Chicago. At the rallies many people have been giving speeches supporting classified employees and teachers’ unions including Bernie Sanders, Nina Turner, John Cusack, and SEIU International Union President Mary Kay Henry. They’ve spoken in front of more than a thousand people from CTU as well as SEIU Local 73 members. It was great to hear and listen to where they stand on all of these issues.

I have enjoyed how everyone from both unions are standing in solidarity and how their voices are being heard. I think Chicago Mayor Lori Lightfoot is beginning to understand the power of workers in unions. Members of both unions are really making their presence known each week at the bargaining table as well as in the streets of Chicago. It has been very uplifting and challenging uniting employees to stand together and go out and strike. It is an honor supporting members in their fight to make their lives better in Chicago. Ultimately, union members standing together in solidarity – from L.A. to Chicago and all across the country – will make a difference for everyone as we work to improve schools and jobs for all.

About the Author: Toi Jackson

Toi Jackson is an Organizer with SEIU Local 99. Formerly, she worked as a Special Education Assistant with the Los Angeles Unified School District.